Primal Carnage is an online multiplayer shooter that will engross its players in skilled PVP combat, team-based strategy and savage class-oriented matches unlike any you've previously experienced; be it an armed human mercenary or a cunning dinosaur, Primal Carnage is sure to unleash the inner beast in anyone who seeks to survive amongst the fittest.

It’s Man versus Dinosaur in the ultimate fight for dominance, who will emerge victorious and who will become extinct?Let the primal carnage commence!

As the Mercenaries, you must utilize advanced first-person military tactics and weaponry, teaming up with your squadmates to crush the vicious onslaught of any dinosaurs you encounter before they reach you first. Only through calculated team-based strategies will you and your comrades be fully prepared for any prehistoric threat that may hinder your operations.

As the Dinosaurs, you will employ a keen awareness of the environment and utilize your natural abilities within a third-person perspective to continue your existance as the most dominant predators ever to walk Earth. 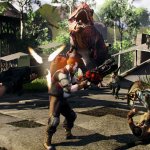